A few months ago, I was reading ‘Frontier Wolf’ by Rosemary Sutcliff, a historical novel about a Roman army officer sent to England to command a fort on the Antonine Wall.  I’ve been reading a lot of children’s books and young adult books lately. Mostly so I can then have Mr. C read the good ones once he’s old enough to read them, but also because I missed out on a lot of good books when I was a kid.

A few pages in the style reminded me of a book I had read when I was a kid.  What was the name of that book?   The more I read, the more it bothered me.  It reminded me so much of a book I had read when I was about ten years old.  Then I remembered that I didn’t finish that book. I had to return it to the library before I was done. This was years before libraries offered renewals of books.  Once three weeks were up, you had to return the book or get fined.   What was the title of that book, and was it really a Rosemary Sutcliff book ?  At about the same time I read an article in the Wall Street Journal about the science of memory.  There’s actually a German word for this experience.  The zeigarnuk effect, which is what happens when unfinished thoughts or activities weigh on the mind more than those that have been completed.

First,  I checked a list of all the books she wrote.  From the titles alone nothing seemed familiar.  I did remember a few details of the plot though.  There were two children living in a village in England where the towns people were preparing for an invasion of Vikings, and I remembered that there was a Viking holding a shield on the cover. A Google search of “Sutcliff Viking book”  brought up the familiar book cover that I was trying to remember from forty or so years ago, “The Shield Ring”.

Apparently it is a difficult book to find in the U.S., at least in the hardcover edition that I remember.  It was first published in 1956 and appeared in hardcover in only one edition, most of which went to the library market. Oh well, I thought, I guess I’ll never find that book, I thought.

Months later, a package arrives in the mail.

A gift from Ms. J for my birthday. 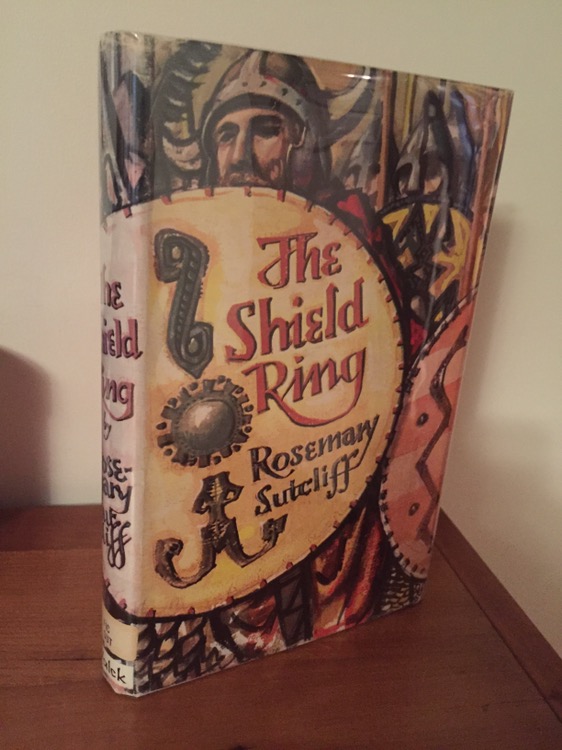 Since Mr. C is six years old now, he’s getting a bit old for most picture books, while also being a bit too young to read very many books on his own.  There are the ‘Elephant and Piggie’ books by Mo Willems, but we’re running out of titles in that series.  It seems as though we’ve read most of the books in other series the library has in his age group too.  We are going through the Tintin series now, and we’ve read Edward Ardizzone’s ‘Tim’ series, but what else can we read ?

So what I will sometimes do is look through the selection of books for older kids, and check out one or two to see if it might be something I could read to him now, or maybe he might want to read on his own in a few years.  I’ll also sometimes take a photo of a book that looks good, and then try to find some reviews and any other information on it once we get home.  If it seems good, I’ll try to remember it, and maybe check it out at some point.  Adding thousands of books to my already huge ‘to be read’ list of adult fiction and non-fiction.

I tend to pick out the books from the early to mid-20th century, usually just because I like the cover art.   It seems as though much of contemporary children’s fiction cover art uses either photographs, or some kind of hyper-realistic style of art, which I don’t really find very compelling.  They also all seem to use the same group of type faces; Helvetica or Arial or some variation of those two.  They all tend to look alike after awhile.  Many of them seem to be about either vampires or some kind of apocalypse too.  Those might be fine for when he’s older, but not when he’s six.  I know that there are some recent non-vampire-apocalpyse books, we have a copy of  the first book in not vampire apocalpyse series  ‘The Penderwicks’ somewhere in the house.  So I could be wrong, but I think I tend to look for the older books since the subject matter is more varied.   I haven’t heard of so many of the older books I come across though.  It makes me wonder what I was reading when I was a kid ?    I really don’t remember a lot of what I read when I was a kid, outside of the classics, so most of what I come across will look vaguely familiar, or at least remind me of some other book.

Here’s some from a recent trip to the library.

‘Adam of the Road’ by Elizabeth Janet Gray.  Looks like it’s an adventure story set in the Middle Ages.  Mr. C does like castles, maybe this one will be good.   Isn’t that a great cover ?  The library had this one filed under “V” for some reason.  I  found out that the author’s married name is Vining.  Seems a bit picky to file it under “V”.  Who is going to know to look for this book under V instead of G, it was published as “Gray”, not “Vining”.  At least our library still keeps these older copies around.  I know that a lot of libraries just throw out older books if they are not checked out often enough.

‘Rescue Dog of the High Pass’ by Jim Kjelgaard.  Mr. C loves dog stories, maybe this one will be good.  He also wrote something called ‘Swamp Cat’.  Love that title, makes me want to see what it’s about just because of the title,  same with ‘Swamp Cat’.

‘Danny Dunn and the Fossil Cave’ by Jay Williams and Raymond Abrashkin.  Seems self explanatory.  Now I remember reading a lot of books like this one, where a group of friends get into some kind of mischief, and they somehow manage to get out of trouble and back home before any adults are aware that they are gone.  I vaguely remember reading a book about a group of kids who built a rocket and took a tour of the moon and returned before their parents came home from work.

This one does seem familiar, ‘Call it Courage by Armstrong Sperry.  Seems like I should know it.  Maybe it was filmed ?

‘The Winged Watchman’ by Hilda van Stockum.  Looks like a story about a group of kids in Holland during the German occupation of WWII.   OK, now I remember reading lots of books like this too.  Kids creating some kind of mischief for the Germans and they somehow manage to get out of trouble and back home before any adults are aware that they are gone.

Another Middle Ages story, ‘The Boy Knight of Reims’ by Eloise Lownsbery.   Another great cover.  I’d check this one out just because I like the cover and the typography.

OK, this one has a great title, a great cover, and I also like that font. ‘Mr. Twigg’s Mistake’ by Robert Lawson.  I want to know who Mr. Twigg is, and what his mistake was, and is that a seal on the cover ?

Where to begin, there’s just too many books to review for Mr. C.

I knew that voice.  Very familiar.  Hmm… What’s going on over there?

We were at our local library recently, I was wandering around picking out books for Mr. C, wile he was taking advantage of the new iPads that the library had recently installed.  It seems as though the library installed them as some sort of “valuable educational tool for the children”.

When we walked into the children’s area, Mr. C ran over to the table where the new iPads were located.  He immediately put on the headphones that were attached to each iPad and started to swipe the screen like an Apple expert.    Taking a look at the various apps, trying out new games, seeing which ones were fun and which were not.

‘You should go look for books for me, while I look at this, Dada!’  he said.  So, seeing how expertly he was able to manage the various apps, with no help from me, I went over to the stacks to pick out some books.

It wasn’t long though before I heard his familiar voice, only much louder than usual.  He had discovered the headphone affect.  This is the way that people tend to talk when they have headphones on, always as though they are trying to make sure they can hear themselves.   Very loud.  VERY, VERY, VERY LOUD.

He was playing a game that asked silly questions, but it seemed as though the app was stuck on one particular question, repeating the same question over and over and over.

‘What is something that is stinky ?’

‘Ok, lets take the headphones off.’

I’m not sure if this is really a “valuable educational tool” or not.