Do these toy pieces left on the floor go up the vacuum cleaner tube or not?

I remember this one, it’s a part of a wooden catapult kit. We looked and looked for this for hours, finally giving up and replacing the missing part with a metal washer instead.  Up the vacuum cleaner tube it goes! 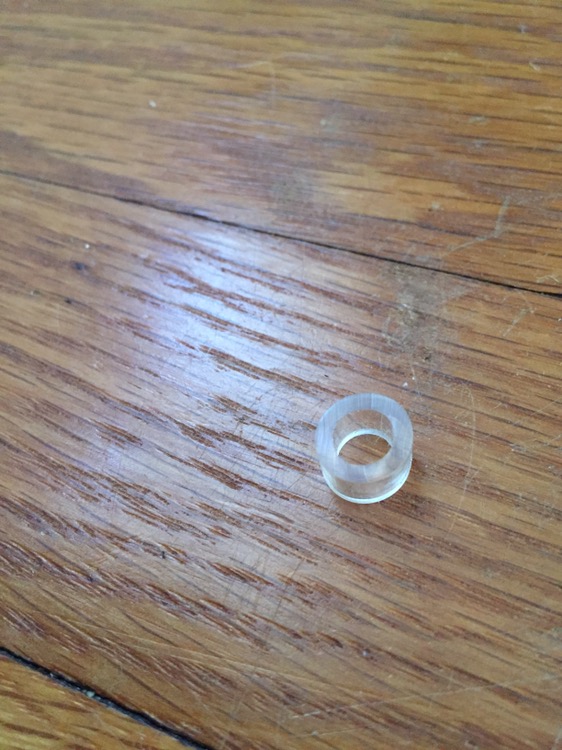 I used to think that stepping on a Lego was the worst thing to step on, but a marble is worse.   We spent some money on those marbles though, so, much as I’d like to reduce the number of marbles in the house, I am cheap,  and I don’t like the idea that they would be lost to the vacuum, so you’re safe Mr. Heel Killer.

We love Legos here, so all Legos get a pass.  You’re safe from the vacuum little Lego piece.  I think this one is from a Lego construction truck set.

This guy is missing an arm and his legs.  Tough call on this one.  Mr. C does like this one, hmmm… lets see if he can find the missing parts.  You’re safe for now, little guy. 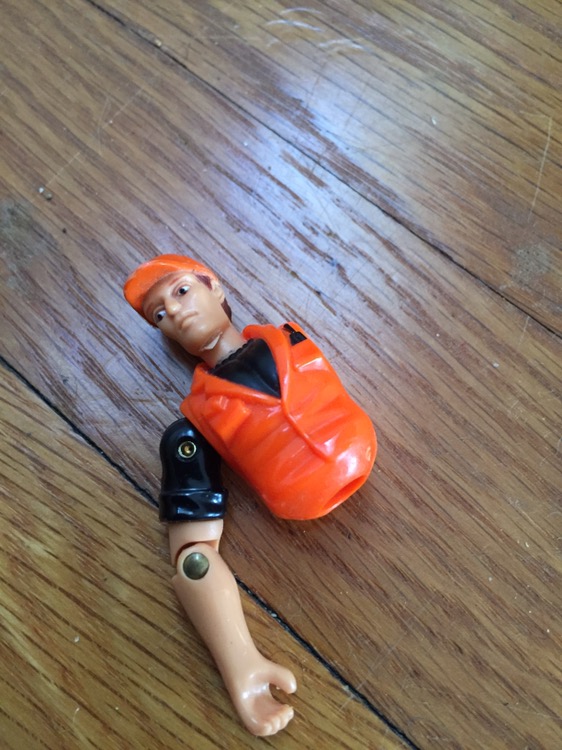 I’m pretty sure this is a piece from a game.   If we don’t have this piece, it will be hard to play the game, so this one is safe.

The smallest possible Lego piece ?   Also safe, though Mr. C has to get these, I’ve done enough bending down for the day.

I have no idea what this is, and it’s not a Lego.  Mr C. doesn’t know what it is either.  Sorry, little part, it’s the end of the line for you.  We’ll probably need you six months from now when we’re playing with whatever set you came from but that’s a chance we’ll have to take. We must reduce the clutter!  Up the tube with you!

This might be a Lego, then again maybe it’s not a Lego.  Hmmm, the judge says it has to be clearly marked to be a Lego.  Sorry, you have to go, whatever you are. 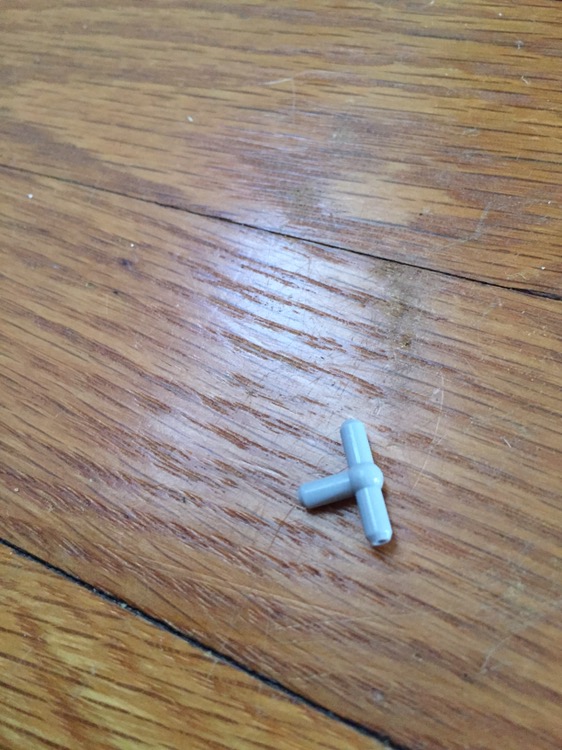 Some time ago, I wrote a post about how organized I was with Mr. C’s toys. This parenting thing is easy, I wrote, how can someone not be organized, I know where everything is. That was when he was much younger, his toys had fewer parts, and they were much larger parts so small children could not choke on them. Now though, the number of toys has increased, and the number of parts has exploded. I am no longer at all organized, I can’t even find that old post much less locate specific parts for his toys. I know, he should learn how to keep track of his own things. He does to a certain extent, but I think that if I can help locate things then I will.

So I started filling up a bureau drawer with the random bits and pieces I came across on the floor, behind furniture, stuck between the radiator fins, or anywhere else I might find things. I thought I would then take some time and then find where the piece belongs and put it back with its matching set or do some repair work if needed. But I hardly ever actually do that. Partly because I don’t end up having any time to do that, but mostly it’s because I usually can’t find the matching toy the broken bit goes to anyway. At some point I’ll just have to go through that drawer, sort it out, and probably throw out most of those little bits. He’ll most likely be in high school by the time I get around to doing that.

Mr. C almost always does not get upset when he comes across something that is broken. So it’s not as though I’m keeping these parts around to stop a potential tantrum. I suppose I’m keeping them since I like a mystery, or solving a puzzle. Or maybe it’s just my frugal nature and I can’t bear to think that something is not being used to its full potential. Aha, here’s that missing truck tire! Now we can get that farm set going again, with this missing tractor tire we’ll have the farm set up and running in no time!

Of the parts I find, I’d say that I end up making a match back to the toy 10% of the time. The rest of the time I have no idea where the part is supposed to go. Here’s an example; what is this, looks like a glove. Where does it go, I have no idea. Should I keep it ? Will Mr. C be upset when he comes across his hand-less figure ?

Or this? Looks like a part of a farm gate, or maybe a truck gate. Is the truck it goes with still around ? I have no idea.

Does this go with the piece above ? Looks similar.

Ms. J has a slightly different policy regarding these toy parts. She doesn’t think its crazy of me to try to keep these random bits aside, but if there is a ‘clunk clunk’ sound when she is vacuuming she will continue with the vacuuming. Oh well, bye bye Lego hand. I however will scan the floor beforehand to see if there’s anything around. If it’s completely unidentifiable, off it goes into the vacuum. But if it looks like it could be fixed, I’ll set it aside. And I do admit that I have opened up the vacuum, taken out the bag and searched for a piece that I have sucked up. Yes, that is a little crazy, I know. I can’t say that Ms. J’s policy is completely wrong, especially since the drawer of broken toys that I’ve picked up, aka the ‘mystery drawer’, is now overflowing and I have trouble closing it.

I will sometimes be able to fix a broken piece, and Mr. C will be thrilled that the toy is restored. Hooray, hooray, he’ll shout. However, an unintended consequence of this is that Mr. C assumes that I can fix anything. While vacuuming a few days ago I came across a little black piece of plastic. It was about the size of a raisin cut in half. Kind of looked like a raisin cut in half too. What is this, I asked Mr. C. Normally, it would have fallen into the ‘completely unidentifiable’ category and I would have let it go up the vacuum tube. To my surprise, he knew exactly what it was. That’s Spongebob’s foot, he said.

He has a Spongebob Squarepants keychain which he likes to use to pretend to lock the door when we go out. He found it and showed me where the missing foot was supposed to be.

Here he is, sans foot.

Maybe as an added incentive to get me to fix it, he started to have the little figure walk around. ‘Ow, my foot is gone, ow, ow, where’s my foot ?’ he would say.

Whenever he wants to have me fix something he will suggest I use Gorilla Glue. It’s a brand of glue that uses a gorilla as their mascot. It works on everything. Everything except a tiny Spongebob leg that is about the size of a strand of spaghetti.

What if we put a bandage on his leg ? I asked him.

How will he drive his car ? he answered.

Mr. C was so excited this morning.    After three months, his missing battery powered Brio train has been found!

As posted earlier,  we somehow lost it within days of him getting it for his birthday.   We looked everywhere.  He was sad about it,  but surprisingly resigned to just having to ‘be on the lookout’  for the train.  I think I would have been inconsolable as a four year old if my birthday present was lost so quickly.  But Mr. C just sighed and said ‘That’s OK,  we’ll just try to look for it.’   Now this is not to say that he is a calm kid.  No,  just that his moods are entirely unpredictable.   Something that might have made me cry when I was four does not seem to bother him and then something that I would not have cared about will send him into a sobbing mess.  ‘Why does this happen, why, why, why’  is a common refrain, as he lies face down on the floor, weeping over my putting the coffee beans into the grinder instead of having him do it.  Who can know what a kid will do.

Anyway,  he was extremely excited about finding the train, which was nice to see.

It was at the bottom of a large plastic bin that we were using to store some of his old clothes.   Ms. J and I were looking through it this morning to try to make some room in a closet.  What to keep, what to discard, what to give away, what to try to get over to the consignment store.  It was surprising to see Mr. C remember things that he used to wear, or sometimes not remember.   I thought that we had seen everything in the bin, and both Ms. J and I had moved on to a different project when he heard Mr. C start shouting.  He had continued to look at what was in the box, and there it was, at the bottom,  under all the clothes.

As we were going through the bin it occurred to me that ‘What he may or may not remember of his early years’ could be the subject of a blog post,  but instead today I’ll write about the train.  Which makes for a short post, but it does make for a happy four year old.